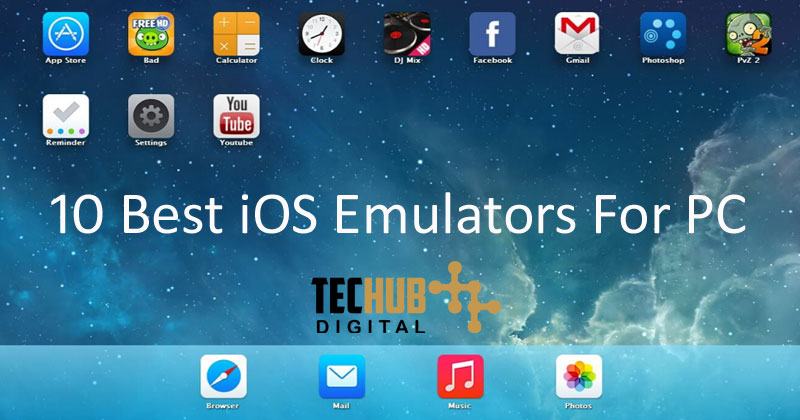 Are you willing to run iOS apps on Windows or Mac PC? This is possible using the iOS emulators which are prepared for Windows and Mac.

Now, many people are not able to own an Apple iPhone, so you want to try the interesting apps that are only available on iOS, you can use the iOS emulators to run those apps on your Windows PC.

There are numerous advantages of using an iOS emulator for example it simulates both software and hardware, can be connected to an IDE for early testing during development, and is an equitably inexpensive solution.

Nowadays, emulators are commonly used for video games. As the emulators enable iOS apps to run on the huge screens of PCs, its use has been in increasingly high demand. The concept of emulation is firmly related to the concept of virtualization.

Emulators are very useful when it comes to playing games – to be more specific, playing iPhone games and install app like vidmate on pc.

Video game emulation permits the user to increase game-in resolution, add post-processing effects, play with various other controllers, and explore all kinds of different features that were not available earlier. With this, you can experience playing iPhone games even if you don’t own one.

Most of the software and apps are platform-specific and that is the reason behind the development of emulators. There are numerous iOS emulators for pc available all over the internet.

Some are good and some are not too good. Some iOS emulators can even outmatch the performance of the original software i.e. application and also includes some additional features.

Here are some of the best iOS emulators for PC which you should try:

iOS emulator provides an iPad or iPhone experience on your PC or Mac. Recently, many of the professionals use this iPadian emulator.

It will work properly if your system is strong and also its UI is self-explanatory. One important thing about iPadian is that it does not allow you to access the official App Store and therefore, you can run only those apps that are specially designed for iPadian.

Also, it provides you with a customizable interface and also includes a notification widget. Its platforms are Windows and Mac. It is available for paid as well as free versions. So, you can use any of them according to your comfort and usage of emulators.

Was developed for developers who use emulators for developing the apps for iOS. It allows you to run the app instantly on any device.

You don’t have to worry about which OS you have used for the app development and there will be no problem in testing your Android or iOS apps here.

The Run Device allows you to verify your application on any physical device. It is not free of cost but has a free version available for testing.

This emulator is browser-based and therefore there is no need to download anything specific thing for it. The developers can utilize this emulator for streaming iOS simulators in the web browser.

It can be used for iOS app development and demonstration. All you have to do is to upload your app and then run in the web browser. Afterward, it will show an in-browse preview which will enable you to run your iOS app and also perform different functions.

As said earlier, its platform is a web browser-based. It is available free of cost and also has premium plans.

Ripple emulator is mainly used for testing cross-platform mobile and HTML file applications without going through a process of complicated setup, unlike some other emulator.

Unlike Appetixe.io, it works in the setup of a chrome extension and not web browser-based. Ripple helps the developers by providing features like DOM inspection, HTML, JS debugging, Automated Testing, and many more as it targets towards platforms like WebWorks and PhoneGap.

One very important thing about this emulator is that your computer does not need to be restarted in case you choose a new device which is one of its positive factors. Its platform is a web browser-based. Also, it is available for free of cost.

Owned by Apple, TestFlight is most widely used by the developers to beta test their iOS apps coded using Xamarin, which can be considered another emulator.

A positive point for an iOS emulator for the PCs is that the TestFlight’s extensive documentation. It helps apps for iOS, tvOS, watchOS, and iMessage.

This emulator has a comparatively technical and a bit difficult setup and for using it, you will also have to create an App Store distribution profile for the same.

It provides the facility of external beta testing of the apps as mentioned earlier. Its platform is Mac and it is available free of cost.

An iOS Simulator in Xcode is a software development environment developed by Apple which has its app simulator for iOS, tvOS, watchOS, and iMessage.

If a user is using the iOS Simulator in Xcode as an emulator then he/she can emulate different types of interactions like taps, scrolling, device rotation, and many other actions.

Also, the apps can be directly launched from the Xcode project but only by the Mac users. You are also permitted to test your web apps by using Safari within Xcode. The platform of iOS simulator in Xcode is Mac and it is free of cost for you to use.

Remoted iOS Simulator for Windows is used to test iOS applications on your Windows PC which is quite popular among users. It is a developer concentrated tool that is available pre-loaded as a part of Xamarin in Visual studio.

It has tools windows that exhibit a very useful toolbar at the top that holds options like Home, Lock, Settings, and Screenshot. To enable Touch ID-like functionality, energize static and moving conditions, shake gestures, rotation, etc. you can go to the settings option.

Also, this tool has the facility of iPhone-like touch signal and stylus input. Its platform is Windows. It is available free of cost and also has paid plans.

Electric Mobile Studio is more preferable for the professional developer. One of its most important features is that it includes fully developed emulation of iPhones, iPads, and amenable apps and also can use the ditto application or software on two machines for some common work setups at the offices.

It can access almost all the iOS applications available in the App Store and so, not only your apps, you can run other apps including many games. This Electric Mobile studio is more preferable for Windows 10 by the developers due to the integrated WebKit and Chrome debugging tools.

With the help of the visual studio, window users can also use this tool. It is quite big; therefore, you need to have at least 6 GB of space free in your system to make it run. Its platform is windows. It is expensive but has seven days of free trial.

Using this you cannot access all the available applications in the App Store as a few iOS features do not work on this. Therefore, you will not be able to try all the applications that are available for the iPhone. As mentioned earlier, its platform is Adobe AIR. It is completely free of cost.

This one is used for gaming. iMAME was designed to recreate the hardware of game systems. It allows the user to play the iOS games on the PC. Even if you don’t own an Apple device, you will be able to play using this iOS emulator.

It has a simple interface that makes it uncomplicated to use. IMAME uses a moderate amount of resources and less power consumption.

Any normal and average computer will be able to load and run games using the emulator without having an encounter with any issue. Its platform is Windows. It is available free of cost, so you can play as many games as you want.

Maximum all the popular and best iOS emulators for PC/windows and Mac are mentioned above. So, if you are willing or want to have an iPhone experience on your Windows or Mac then do try any of the ones mentioned above.

You can use anyone according to your needs. Till now, you must have noticed that most of these emulators are focused on app development and testing whereas, some are focused on playing games that are available on the iPhone.

Therefore, you can choose your emulator according to your requirements – App development or gaming.

One thought on “10 Best iOS Emulators For PC (Tested Guide)”